I had a rootless, feckless childhood and grew up fit for nothing (except reading historical novels). By some stroke of luck/gift of grace/absolute miracle (you choose) the points on my track were thrown and my direction changed.
Part of the story is that I went from being unemployed to working in a publishing house, looking after a picture researcher and, in time, I became a picture researcher. It was the most wonderful job. The task, which I chose each time to accept, was to illustrate text with pictures, whether for magazine articles or TV programmes, but most often it was for books. I’d spend about six months on one subject becoming an expert in its imagery.
It was a difficult job requiring much skill ranging from ‘having an eye’ to being able to do paperwork. The latter was the greater part. It might take me five minutes to find the right picture, but fifty-five to obtain a transparency or print and clear the copyright.
Stephen Poliakoff’s Shooting the Past was a romantic view of the world of the picture library. In real life those characters would have been on the phone haggling deals with picture researchers. We always had to haggle deals, because the cost of publishing a picture was ridiculously expensive. We knew on every project that we’d have to get libraries to discount their charges by about nine tenths.
The ones who would never budge were the museums and institutions. We used them as rarely as possible but they were canny; after a wobbly start after the invention of photography they soon forbade anyone to take pictures in their galleries (‘it will fade the objects’) and they got around the copyright law (which vanishes 70 years after the death of the ‘author’) by saying the author was the photographer not the painter of the scene photographed (the law concurred).
So museums and institutions creamed it in, and I never felt obliged to put any money in their begging bowls.
Yesterday things changed. Yesterday Yale University made its images available free. I don’t understand this new world economic model but in this instance I’m not complaining. I went straight to the site to see what goodies I could find.
I’d hoped for something equivalent to the shop windows in Bond Street but it’s more like a library where you have to know what you want and fill out a form for it.
So I browsed a little in the fifteenth century and the very first image that came up was of a character in my third novel, The Rebirth of Venus. 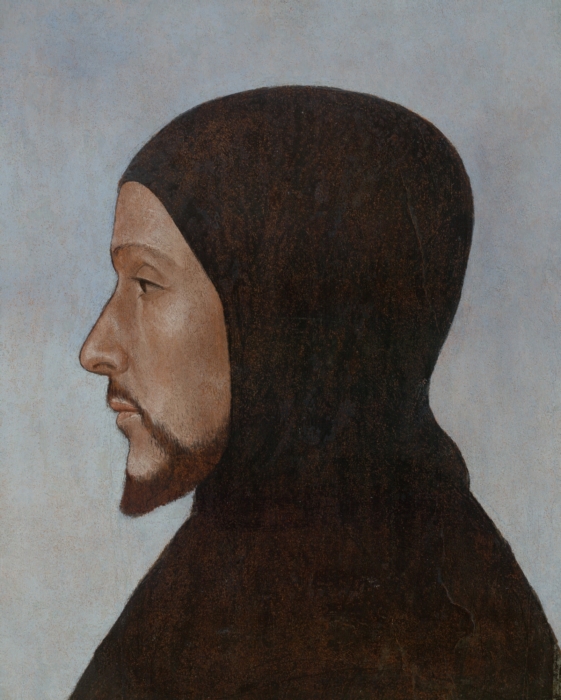 Fra Mariano was a preacher and a Platonist. His quick, able mind secured the patronage of Lorenzo de’ Medici; the quality of his philosophical sermons attracted great minds of the time such as Pico della Mirandola and Angelo Poliziano. He was the thinking man’s preacher. But he was no match for the fundamentalist opinions of Savonarola, who accused him of sophistry and arranged for an ignominious end to his career.
My first thought on seeing the image was ‘Fake!’ No one of the period wore a trimmed beard like that; by the time such beards were fashionable, portraits in profile were long since past. But no doubt greater minds than mine have examined the painting and found it genuine. Certainly it is beautifully painted and the face itself has the Botticelli touch.
If I were still writing that novel, I’d definitely use this as a genuine portrait because the fineness of the features adds greatly to the character.
I’ve been back into the gallery since to find something else to illustrate this page but everything I’ve looked at has been thumbnail sized and less and I haven’t been able to find a bigger version (as I did for Mariano). On this performance, Yale is not going to fulfil my need for free images and I shall have to continue with my guilty use of Web Gallery of Art where, every time I use it, the law-abiding researcher still within me ahems into her fist and asks, tartly, ‘how is it possible that you use these images for free?’ To which I reply, ‘Don’t ask!’
Does anyone else know of free resources in the realm of art and history?