To think that writing is something that happens at a desk is such a mistake. Today, being Equinox, is the first day of my new season, where writing gets priority (mostly over gardening), and how did I spend it? I went into Oxford, started a course in drawing and met a friend for lunch. ‘Well,’ I thought on the way, ‘what is this if not major procrastination?’


I took an early bus so that I could detour via University Museum, whose flower beds I visit monthly for inspiration in planting, and to pick up a new sketchpad at Broad Canvas. What could be nicer than kneeling on the floor of an art shop riffling through sketchbooks? I may not be writing but, boy, this is is turning into an artist’s date, as recommended by Julia Cameron in The Artist’s Way. Something to stir up the old creative juices. I had a bad night, thanks to the central heating coming on, a really bad night, a really, really bad night, so I did something I haven’t done for a year or more: I bought a bar of Cadbury’s chocolate, under the conviction that it would give me a caffeine shot for the class (no, I didn’t think of coffee). And it was with a piece of chocolate blearing my mouth that I met my mentor in the street, close to the Ashmolean, whom I haven’t seen for as long as I haven’t eaten milk chocolate, and who, yes, I confess, I’ve been avoiding. ‘How’s the book going?’ Bleugh-blare-blug. It’s not only the chocolate; some of the teeth that ought to be in my mouth are still in my handbag (witches of old used to carry their eyes in a pocket – I carry teeth in a bag). Once I could speak, I fobbed him off by asking a question. My story will end with a couple of the slave characters becoming Christian, I told him. That would be right, yeah, in the first century? Absolutely not. After a short lecture in the street about the need for evidence before you make conjectures like that, even if you are a novelist, I smile, in a closed-lips kind of way, and say ‘So I need to rewrite the ending?’ ‘You do,’ he said, with some compassion.
All this was under the gaze of the god.
I found the art class in the basement of the Ashmolean, was welcomed by the ebullient teacher, given my seat, my pencils and rubber and, with a dozen other silver-heads, went back to school. What fun! What terrific fun! School kids were screaming about outside with clipboards but we went into profound silence as, tongue between teeth, we drew museum objects. I had a Greek drinking bowl and, while half of me wondered who had drunk from it, where and when, the other half became overawed by foreshortened ellipses and the play of light on the colour black. We were, our tutor said, ‘in the zone’, the zone of full attention, and learning how to see. I came out two hours later and found myself seeing completely differently. Statues I’d never noticed before jumped out as forms demanding to be drawn. ‘Later, later,’ I promised them, ‘for right now I have a date.’
A friend I haven’t seen since before I gave up eating sweets or consulting my mentor got in touch a few days ago saying she had to see me, and I waited for her outside the museum. While I waited, I drew some flowers in the bed that were the same as those I’d seen earlier at University Museum. And a leaf or two. A party of school children roared up the steps ebbing and flowing around their teacher, clutching clipboards. ‘And here we are at the front of the Ashmolean Museum,’ he said, ‘which is built in the style of an ancient Greek temple.’ A Greek temple, huh? That’s where my story starts. I looked up at it with my very fresh eyes.
‘At the top, over what is called the pediment, is Apollo, the god of music.’ I craned my neck. I took photos. Apollo is the god of my protagonist. I saw that he had his arm raised in blessing over me and the children. 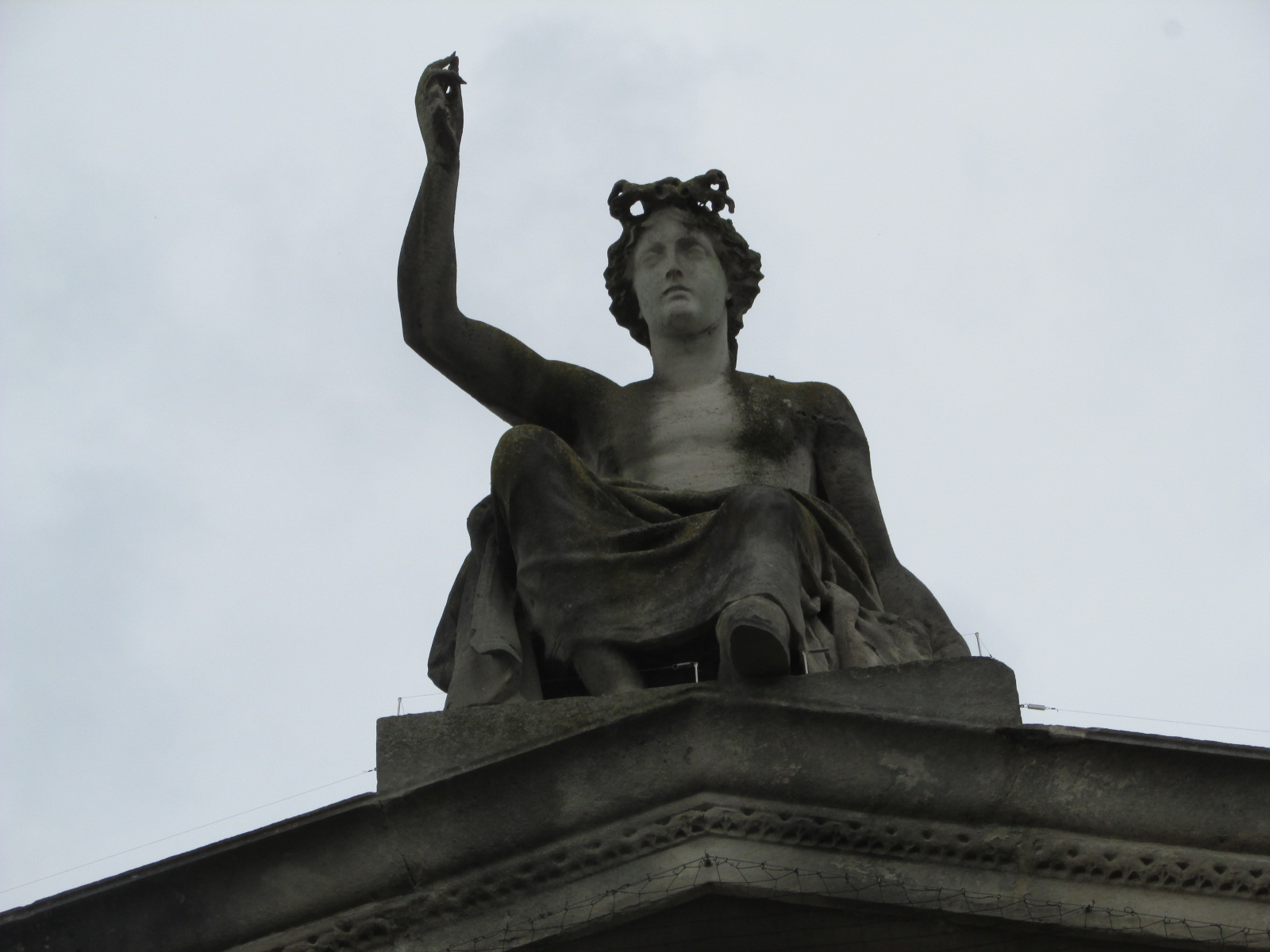 ‘Linda!’ cried my long-lost friend, running towards me. ‘I’m so sorry I’m late!’ Usually when people want to see you, it’s because they want something from you, a listening ear, some advice, a glance over their manuscript. This friend had driven all the way from Lincoln because the gods had prompted her to. She wanted nothing. We walked to the Nosebag for lunch where we went over old times and to my amazement I realised that the sacred place she once established in Leicestershire as a sanctuary and retreat must be very close to Venonis, which is at the centre of my story.
‘Oh darling,’ she said, ‘it was next to it.’
Could it be that during the trip I had there all those years ago, a seed was sown, unbeknownst to me, but very knownst to those who look down on us from the roofs of museums? All I do know is that it  really pays to get out, and that writing isn’t done at the desk. But that isn’t quite true, and now that I’m here, I’d better get on with that new ending (not Christians). And the new beginning (in the Greek temple). And definitely the new middle (at Venonis).