Thanks to a beautifully written post on The Idle Woman, I took myself off to the Royal Academy yesterday to see the exhibition ‘Bronze’. On the bus to the station, I was reading Philo the Jew, as you do. Well, no, no one normal does that (more’s the pity), but this was research. Having discussed courage in his book On Virtue, Philo goes on:
We must now proceed in due order to consider that virtue which is more nearly related to piety, being as it were a sister, a twin sister, namely, humanity, which the father of our laws (Moses) loved so much that I know not if any human being was ever more attached to it. (Philo, 1st century AD).
On the train, oh, the pleasures of Kindle, I turned to the newly purchased book by Francine Prose, Reading Like a Writer, and in one short hour rediscovered my love of literature. Yes, of course, all writers should read, but is it just me or do historical novelists end up reading far more history than fiction? Up to my eyes in Romans and Celts, not to mention Philo, I haven’t got time to read Katherine Mansfield or Virginia Woolf or anything ‘out of period’. But the aptly named Prose is a great writer and soon had me resolving to read completely out of period and get my sentences tuned up. She has many magnificent quotations from modern literature to study and analyse. One of them, from Philip Roth, whom I have never read, was this:
But who is set up for the impossible that is going to happen? Who is set up for tragedy and the incomprehensibility of suffering? Nobody. The tragedy of the man not set up for tragedy — that is every man’s tragedy. (Philip Roth: American Pastoral).
Clearly the theme for the day, established by 11am, was ‘humanity’. Humanity is, after all, what literature has to offer us. All those stories of all those human beings, meeting things we may meet, things we hope never to meet.
And so to the RA. What, people have been asking, can they possibly do to follow the David Hockney exhibition? Here’s the answer – a display of bronzes throughout time and culture. Almost at once I was baffled by the arrangement. Where was the usual tour beginning in misty antiquity, going through the classical world, medieval Europe, Renaissance, the Boring Age to our own denatured times? Everything was muddled up and arranged according to broad categories: Gods, Heads, Objects.
It was like the Pitt Rivers Museum here in Oxford, where you can find Eskimo lace next to Welsh Miner’s whalebone carvings. It’s completely creative to have all your anticipations deconstructed. You are freed to see anew and to spot the preposterous judgements in yourself even as they arise: ‘Good heavens, they could do this in the fourth millennium BC?’ (Naughty RA to succumb to the PC requirement that we rename our eras BCE and CE).
It soon becomes evident that we have been capable of great art since the beginning and, further, that there is almost nothing between ancient and modern. It is all the same brilliance and genius.
There is one difference however. When it comes to contemporary art, such as beer cans or a football in bronze, something changes. It’s as if all the spirit has been sucked out of art. What will they think of us when they look back on our secular materialist age? ‘They will marvel,’ said my companion, Darby Costello, who came up with the phrase ‘secular materialist’, ‘at all we have achieved without gods.’ Anyway such objects, from Remington’s cowboys to Koon’s football, did allow us to pass by and breathe a little, for almost everything else was utterly captivating.
Highlights:
The Chariot of the Sun, Trundholm, Denmark, 4th cent BC 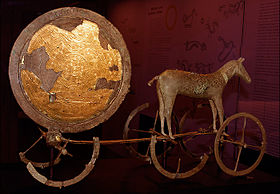 The Greek head of a horse, 400 BC, which spent some of its long life in the garden of Lorenzo de’ Medici (why didn’t I know that?).
The Chimera from Arezzo, composed of a lion, with a gazelle growing out of its back being eaten by the snake which is its tail. I identified this as Romanesque or perhaps Byzantine. It turned out to be Etruscan. (This exhibition destroyed my opinion of myself as being rather good at dating and placing objects of art.) 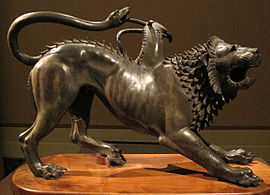 Bronze cast copy of Cellini’s Perseus and Medusa from Florence. Huge and enthralling – even the shadows it casts on the wall are wonderful.

The Shadow of Evening, Etruscan from Volterra. This statuette had inspired a scene on shadows in Volterra in A Tabernacle for the Sun. The day I heard my first novel had been accepted for publication (by Allison and Busby), a friend advised me to go out and buy myself a present. I went to the Ashmolean and what should I find in the gift shop but a little figurine of Shadow. So wonderful to see it in its bronzey flesh again.
Uber Highlight:
Roman Parade Helmet, Cumbria, 1st century. OK, it’s my period, but more than that, it’s familiar, and my poor old memory section in the brain creaks into action and sends up sparks and the smell of burning flies as I try to remember why this is so special. And then I do. I’d seen it on Alice Roberts’s series ‘Digging for Britain’. When it was found – only two years ago – it went on sale at auction and was bought by a private collector. Roberts spoke mournfully to camera about how this precious thing had been lost and would never be seen by the public. Well, wrong. Here it is! (For the story, see Wikipedia) 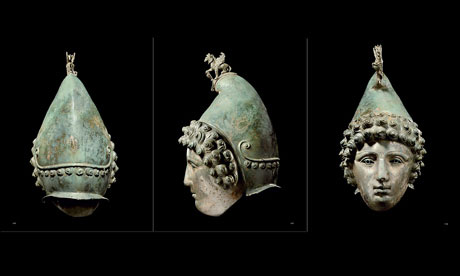 Uber Uber Highlight:
A father with his three year old son on his shoulders. They are standing in front of il Porcellino, the great bronze boar from il Mercato Vecchio, Florence, its snout rubbed smooth by generations of superstitious hands. It sits – as I had never noticed before – in front of a pool made of a mirror, in a little bronze landscape of grasses and plants filled with creepy crawlies. Father and son were identifying snakes, toads, frogs. From a short distance, I watched the little boy engaging with art and knew I was seeing something truly magnificent that I cannot put into words.
On the way home I saw the headline ‘Now it is a murder hunt’ and my heart plunged like a lift whose cables have been cut in grief for that family suffering what must be so close to unendurable. Who is set up for tragedy and the incomprehensibility of suffering? Nobody. I got home expecting to hear that little April’s body has been found, but not so, they have just stopped looking for a living five year old and are looking under the earth rather than on top of it.
One of the more uncomfortable exhibits was Bernini’s The Damned Soul which features on the poster. A face contorted by the horror it must endure forever is not easy to look at. 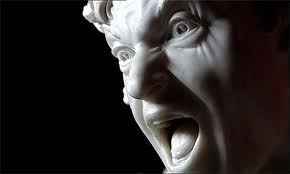 Whether to be at your desk or in the garden