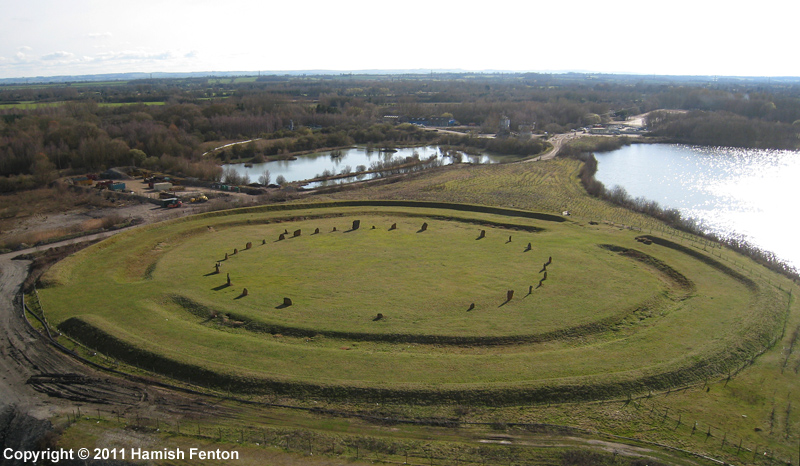 It is a little known fact that the waste disposal centre at Stanton Harcourt is a sacred site. It’s also a good waste disposal centre, being small. You arrive, go up a ramp and park anywhere – all skips are within a few steps. The staff are friendly and helpful. ‘Bloody hell!’ said one of them to us as we offloaded a dead box tree. He’d just found a deer’s head in ‘General’. ‘Bloody staring at me, it was.’ Do sacrifices continue here?

Most people, having left their junk, drive down the ramp and return home. But I recommend you continue on into the site through the gates. Just inside is a small car park. 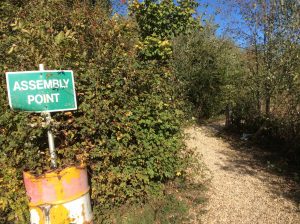 Follow the path which leads round a lovely, tranquil gravel pit lake. Walking shoes will help. 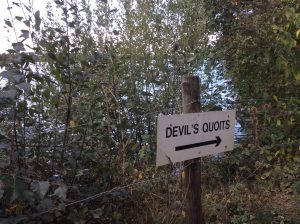 Eventually you come to a sign to the quoits, and you keep going on what is now a dirt track through a plantation of native fruit trees (these guys, these sensitive guys…).

And then it hoves into view, the sacred stone circle that has been reconstructed from original stones amongst the hills of landfill: Devil’s Quoits. A medieval name for a game of rings which implies there were more stone circles in the vicinity. Certainly the one found recently under Keble College, Oxford, is of the same period and size, and there was another further down the Thames at Dorchester.

Dating from between 4,900 to 4,500 years ago, this ring of stones has been reconstructed to how it would have been when the Romans came in AD43. Artwork on the noticeboard entrance shows a landscape of burial barrows. It was, as with all circles, a place of assembly, of coming together for scattered tribes and families. It lies close to the confluence of the Windrush with the Thames, as the Oxford henge lies in the embrace of Thames and Cherwell.

It was reconstructed by Oxford Archaeological Unit in association with Waste Recycing Group Ltd., under the auspices of English Heritage and Oxford County Council. It was work done with great care and consideration, creating something which, even today, even here, has atmosphere. So, if you ever want to spend time completely alone in a stone circle, fill your car with clutter and head off to Stanton Harcourt. Don’t forget a prayer for forgiveness to Mother Earth as you add to landfill. And don’t frighten the staff with decapitated animals.

Excellent directions and location map can be found at the Megalithic Portal.