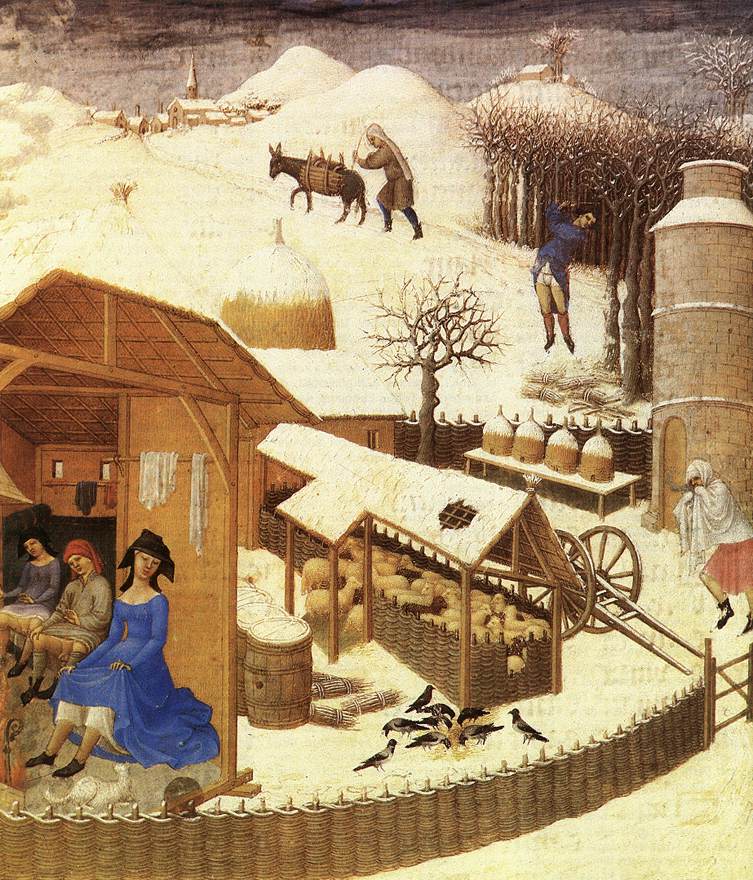 Peasants warm their naughty bits at the hearth.

It is the midpoint of winter, half way between solstice and equinox, an eighth, then, of the quartered year.

The word februa in Latin refers to cleaning and purification, rites traditionally associated with spring. So get the feather dusters out! The Anglo Saxon name for the month was sol-monath, or cake month. Nice… Good old Anglo Saxons.

Candlemas (February 2nd) is the Christian version of the pagan Festival of Lights. In the Christian tradition it celebrates the visit of Jesus to the temple, and the ritual purification of Mary forty days after the birth of Jesus. Candles were blessed in the church, to give light to the year ahead.

Snowdrops are known as Candlemas bells. The snowdrop in purest white array first rears her head on Candlemas day.

We usually have an allotment society get-together before Christmas but this year it was forgotten, probably in the excitement of snow, so it’s happening this week. When it was first mooted, I suggested we hold it on Plough Sunday on January 9th. That seemed very appropriate, but the organiser was busy having Christmas that day. So then we alighted on February 3rd, and ever eager to find a theme, whether in writing or life, I said, somewhat excitedly, ‘Well, that’s the day after Candlemas!’ I’ve remembered Candlemas from last year – I think it cropped up as a good time to sow or plant some particular thing, only I missed it and was sorry (planting potatoes on Good Friday always works). So I said, ‘Let’s tie it in with Candlemas!’ Obviously, being so brief in my communication, I didn’t fully express the idea to the organiser, or convey to her the vision of tea lights in jam jars which I was enjoying, but I got an email a few hours later saying that, in her view, some people would be likely to take offence if we were to associate our ‘do’ with a Christian festival.

Now is this woman a Moselm or a Jew, a Buddhist, a Shintoist, even a Marxist? No. And I doubt if any of these faiths would object to a few candles in the deeps of winter. No, she is a biologist. Say no more…

[With thanks to Mandy Barrow’s Project Britain site, at Woodlands Junior School, Kent, for the Candlemas information].