As everyone knows, we Brits have the weather as our number one topic of conversation, so the fact that this year we are hardly mentioning it signals something really bad is going on. We say nothing but may pull a face when we meet. The shoulders of fellow gardeners slump when you dare to ask, ‘How’s it going?’ We watch the spuds for the blight which must come, we lift rotting onions and consign all leafy things to the slugs in a very un-British act of hopeless surrender. Why fight? There’s always the supermarket.


In 1816 there were no supermarkets. Everything was local. There was no news broadcasting. So when the summer disappeared in endless rain, darkness and cold, and the food prices began to rise, not knowing about cause and effect the British did what they do so well in a state of ignorance – they rioted. Starvation was widespread: it was one of the worst famines on record. The cause? Not the jet stream but a huge volcanic eruption of Mount Tambora combined with a period of unusually low solar activity.
As a gardener, I despair. This is 2007 all over again, the year when I began blogging because we were marooned. The floods separated us from the allotments and we couldn’t reach them except by kayak for ten days. When we did… Well, that was the year I saw grown men crying. I felt like giving up but, hey, we’re British and we took the opportunity to build some raised beds.
In 2007 I had tried biodynamic gardening for the first time. It took five years to pluck up the courage to try it again. And, yup, here we are, torrential rain wiping out all that pernickety moon planting. Surely the weather isn’t subject to what Linda is doing in her garden? So it’s a coincidence, that’s all, but forgive me if I now abandon biodynamic gardening forever. Call me superstitious…
As a writer, I love the sound of rain. It keeps me indoors. It keeps me working at the desk. I usually contain writing between autumn and spring equinoxes, but this year Persephone remains in hell for the summer. Whoopie!
In 1816, some friends were on a walking holiday at Lake Geneva but in the Year of No Summer they were forced to stay indoors. They challenged each other to come up with a horror story. They were Percy Bysshe Shelley, his lover, young Mary Wollstonecraft, and Lord Byron. Mary won the challenge when the gloom of that summer’s days, combined with conversations about galvanism, caused her to have a dream of a scientist inadvertently creating a monster.
Dark days, deep imagination, and a metaphor for modern life.
So I relinquish my lettuces to slugs, hang up my hoe and retreat into the Hades of the creative imagination, hoping for a Frankenstein – story idea, that is, not a monster! 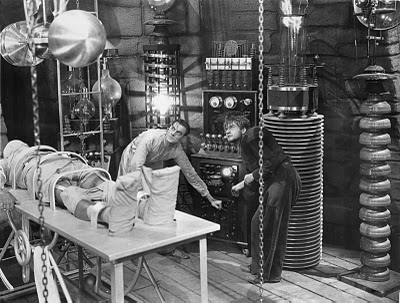 The hardest books in the world to find