Out on the allotment yesterday evening, I saw a prism of light in the sky, north west of the setting sun. I asked a plot neighbour who said it was a sun dog. I’ve just looked it up on Wikipedia and find that the phenomenon is an ice halo with the sun’s light refracting off ice crystals in cirrus clouds. Shows how cold it is! (I couldn’t sleep for cold last night – with winter blankets in store, I had to wear my dressing gown). Apparently it would be one of a pair, 22 degrees either side of the sun, but I neither saw t’other nor the halo that joins them. On its own it was enough to cause wonder; even though I knew science would have a perfectly rational explanation, the wonder was undimmed. It was like a little bit of rainbow in the wrong place, a Newtonian experiment in light, an angel imagined by Turner. I remembered vaguely that such things had names, which is why I went to the young couple digging their plot by the well. She knew the name; he scratched his head and confessed he’d thought it was the sun.
This is what I saw, but the photo comes from Wikipedia: 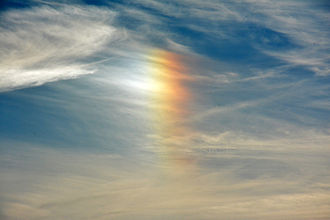 Seeing this quite makes up for not seeing the Perseids meteor shower last week, partly due to my being asleep during the night (rare phenomenon in itself), partly due to cloud. The wonder of meteors has indeed been dimmed by science and it’s hard to get excited about the debris of a comet, especially one called Swift-Tuttle, but hexagonal ice crystals refracting light? Oh, yes!
Sun dogs in history are generally taken to be signs of ill omen. We have plenty of fears to choose from, but I can’t help noting that today sees the beginning of the election of the new Labour leader and, although my heart is with Jeremy Corbyn, because he has principles and stands by them, the prospect is a bit scary. The real concern, however, should be why the sky is so cold in August.