I was looking cotton up on Wikipedia. I’d had my nun dressed in undergarements of cheap, scratchy cotton, but thought I ought to check. Just as well! Back in the fifteenth century cotton was so rare that they thought it came from sheep which grew on trees.

During the late medieval period, cotton became known as an imported fiber in northern Europe, without any knowledge of how it was derived, other than that it was a plant; noting its similarities to wool, people in the region could only imagine that cotton must be produced by plant-borne sheep. John Mandeville, writing in 1350, stated as fact the now-preposterous belief: “There grew there [India] a wonderful tree which bore tiny lambs on the endes of its branches. These branches were so pliable that they bent down to allow the lambs to feed when they are hungrie [sic].” (See Vegetable Lamb of Tartary.) This aspect is retained in the name for cotton in many European languages, such as German Baumwolle, which translates as “tree wool” (Baum means “tree”; Wolle means “wool”). By the end of the 16th century, cotton was cultivated throughout the warmer regions in Asia and the Americas. 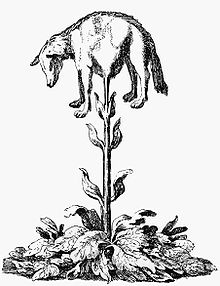 I sometimes amuse myself by wondering what we do/think/believe now which they will preposterous in the future. Any suggestions? Here’s one for starters:

‘They took the toxic waste from pesticide manufacture and put it into the public water supply to prevent tooth decay. ‘