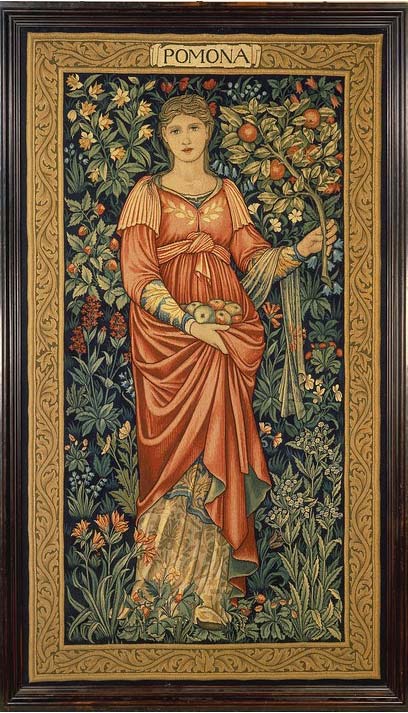 It’s all apples now, falling like small thunderclaps on to the ground, crashing into the wheelbarrow. It is the wormy ones that fall by themselves, leaving the whole ones on the tree for another couple of weeks of ripening.
I chase apples through the dictionaries to find out why they are called poms. The Latin pomum, pl. poma, at first meant any fruit but in time became especially linked to the apple (and, of course, the pomegranate – pom plus grain).  We find pom in many other words, such as pomander and pomace, which is the name of the pulp left after juicing.
In the hunt, I stumble upon Pomona, a Roman goddess and daughter of Ceres and Neptune. She was one of the twelve gods called Numina, guardian spirits of Rome. Her feast day is not known: August 13th and November have been suggested, neither of them satisfactory.
As I hunt, I begin to wonder about the origins of Apple Day, for it is a tradition without a history. ‘Oh, it’s apple day!’ people cry in October, and I wonder why I never knew about it when I was a child. So my dictionary hunt is abandoned for a session on Google and I find that it’s a tradition that began in 1990, or shall we say custom? For ‘tradition’ by its nature is a word that suggests some length of time. The begetters of this custom were Common Ground. This is a group founded in 1983 to inspire people to engage with their local environments, creating projects such as Apple Day, Parish Maps and New Milestones. A bit of a success then, as such groups go, for Apple Day is everywhere now although, like Pomona, we’re not quite sure when, except sometime in October (the first, which Common Ground set up at Covent Garden, was on October 21st, but our village orchard is celebrating on October 9th this year).
And so Pomona, who was hardly heard of after her brief rebirth in the imagination of William Morris, has returned. The orchards are blushing with heritage varieties and names that were nearly lost. Our own community orchard, born of the Common Ground initiative, was planted in 1993. Local varieties were tracked down and now it hosts rarities such as Bampton Fairing, Winter Greening and Sergeant Peggie. My own favourite is a new variety which has been named after the village.
The windfalls will be juiced, turned into chutneys and cakes, and sold on Apple Day to fund more trees. As I write, my husband is peeling and chopping. Our own dear tree in the garden is Lord Lambourne and he keeps the freezer stocked for the entire year.

I am the ancient apple-queen,

As once I was so am I now. For evermore a hope unseen

Betwixt the blossom and the bough.

And where the windy grave of Troy?

Yet came I as I came of old,

From out the heart of summer’s joy.

The Goddess of the Returning Light