Samhain was the start of the Celtic new year, so November was a good moment to begin a new novel. Although my subject is still Renaissance, it is a very different one this time and the story is set in first century Britain. So we have a new appearance for this blog! Of course I shall always remain besotted by the Italian Renaissance and it’s sister. As I walked into the exhibition at the Queen’s Gallery on the Northern Renaissance, it was like arriving at a royal soiree only to discover the presence of a couple of old and much loved friends.  Durer and Erasmus, the presiding spirits of the first room, were both major characters in The Rebirth of Venus. Since the gallery is small and very intimate, the sense of being with them was intensified. Two pictures stood out. One was Durer’s portrait of Melanchthon, the other his portrait of Erasmus at his desk. The images here show nothing of the breathtaking fineness of the actual prints. 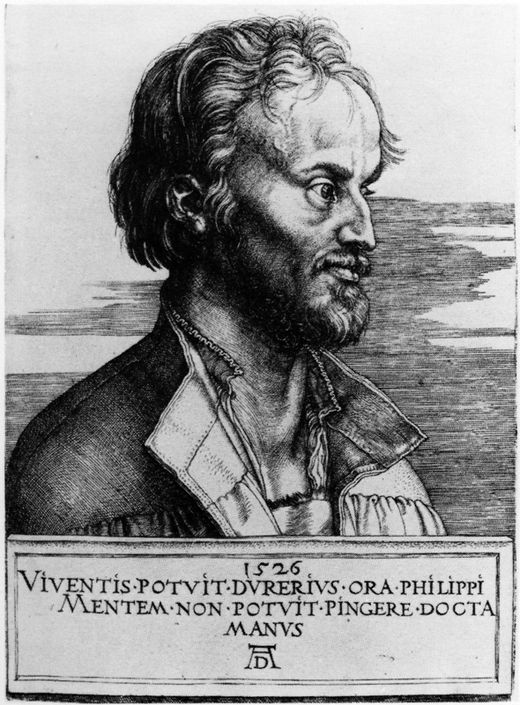 What the text on the engraving of Melanchthon says is, ‘Durer was able to draw Philipp’s face, but the learned hand could not paint his spirit.’
In that respect, perhaps writers have it easier than painters.
On the Scrivener programme I now use in preference to anything else for writing, I’ve been using the facility to make a visual gallery on the ‘cork board view’, like pinning up photos and notes as I used to do when I had walls (I now only have bookshelves). Last week I spent a hugely enjoyable period of displacement activity (i.e. not writing) by ‘casting’ my characters, browsing about amongst actors, celebrities, TV archaeologists, you name it, for some visuals. In my Renaissance novels I didn’t have to do this: almost every character had his or her portrait done by one of the leading artists of all time! So I made up my cork board of portraits of modern-day folk who more or less fitted the slightly ghostly images I had in mind for my Celts. (For the Romans, I have marble busts).
Now I’ve been writing about these characters intensely for a month, although they are still in that shape-shifting stage, forever fidgeting while I try and pin them down with words. Looking at images of very real faces made me uncomfortable and, when I went back to writing, it was the ghostly image that returned to mind, not the photographic portrait I had chosen. My hero’s sidekick may fit the description of Neil Oliver, but he is not going to be played by Neil Oliver and certainly doesn’t have a Scottish accent. He resists. Small, wiry, dark – it’s the best I can do when I can’t see him. 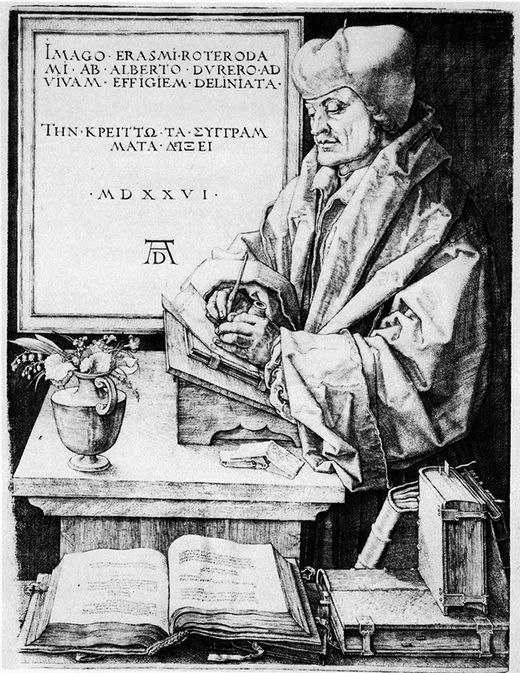 When I came upon this portrait – and others – of Erasmus in the exhibition, I realised I had never ‘seen’ him while I was writing about him. I heard him, fine and clear, but he did not perform like a puppet, this engraved image suddenly looking up from his own writing and giving me a wink.
Worried, I wrote to Lindsay Clarke and asked if he could see his characters. His reply was fascinating: ‘Though I’ve got a pretty strong eidetic imagination, I guess that my characters begin to fill out when I eavesdrop on them, so yes, I suppose I too begin with voices. Visually they sometimes remain surprisingly vague, though I could sketch them if I was pushed, and occasionally do.’
So I’m not alone in hearing rather than seeing my characters. What is your experience?
Next time I return to brainstorming a character on the cork board, I shall scan in some drawings I have made because I think, like Lindsay, I could draw them at a pinch, even though they would look somewhat ghostly and uncertain, for now at least, until I have finally captured them in words. But really, what it shows us is that the physical appearance doesn’t matter. Some authors get by without making any comment on how their characters look. As Durer attempted, so is it open to the writer to achieve, to paint the spirit. Laboured paragraphs about squinty eyes and bandy legs could be counter-productive when the word which sums the character up is ‘generosity’. But such a contradiction between appearance and spirit is exactly the problem which confronts me with the Emperor Claudius; that and him having been done to perfection by Robert Graves.