It happened like this. The week we got rid of the printing press, our neighbour got rid of her piano; I could see what Mr Smith was thinking. It was too late for him to nab that piano, but he discovered that another neighbour wanted to get rid of hers, so he began the business of talking me into adopting it. Now I have no objections to pianos per se, but ours is a very small house and space is at a premium.
At the time I was reading Children of God by Maria Doria Russell, the sequel or rather second half of the duology beginning with The Sparrow. In it she continues her theme about the divine nature of music and the story features an electric piano. An electric piano… now, there was a thought. I soon discovered that buying one would cost not much more than moving an old piano. Mr Smith agreed without struggle and a Casio keyboard arrived a few days later. 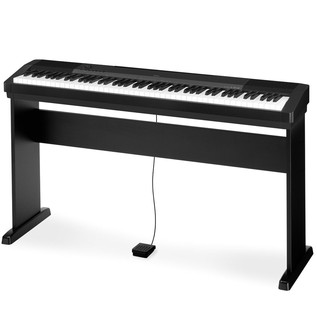 (In Children of God MDR goes on to extol the virtues of a real piano, which I’m sure is true; it was too late now, but I do think of it each time I sustain a note: that, sustain it as long as I like, it will never reach God.)
There it sat, combining with the TV in what is now a particularly ugly techno corner, and there it sat in absolute silence. For weeks. I bought a book on reading music and found it was just that, when what I needed was a book on playing music. Mr Smith found a much better book, Pamela Wedgwood’s It’s Never Too Late to Play Piano. Perhaps not, but it took me some time to work out why the tunes on the CD didn’t match the ones in the book. A child would surely have twigged that they were accompaniments much sooner than I did.
And then, like jumping out of a window with Peter Pan, I was off.
I have never wanted a piano, have never thought about a piano, apart from my teenage guitar and dulcimer, have had no desire to play music let alone read it or learn it, but suddenly I found myself doing all these things. Another neighbour has a piano but she never plays it because she’s too shy to practise against a party wall that has a child prodigy on the other side, going up through the grades like a Freemason on speed. I challenged my dispirited neighbour to learn a carol by Christmas and she picked up the gauntlet. Which meant I had to do my part in this challenge. We Three Kings was mastered very quickly, but the book only has the first few bars. A much greater challenge was at the end of page 17.
Jingle Bells has become my First Hurdle in the journey into music. It involves both hands working at once. OK, can do chords with some warning and a little bit of practice. What I can’t do is two independent things at the same time. While the left hand is pealing down from C to F, the third finger of the right hand is repeatedly tapping E. The trouble is, it’s 3 Es while the left hand is doing 4 notes. Suddenly my brain is like an old neglected machine having the dust blown out of it and oil put in. I can do it, I tell myself every day, I can do it. It’s regular now, addictively so: half an hour’s practice per day, half of that on scales, the other half on Jingle Bells. I’m getting there. I’ve got 22 days left. and I have to say I’m really looking forward to Boxing Day and page 18 in It’s Never Too Late to Play Piano.
Meanwhile, my memory is clearly improving, my sleep is improving, my typing is improving, my writing is improving. As for my appreciation of music … I listen to classical music now not to be carried away by the lovely melodies, but technically, with an ooh! and an ahh! and an I’ll never do that! And not only classical. I was watching a video on YouTube of Maz O’Connor singing London Lights at the keyboard. That she has three lines of tune going at once, with two hands and voice, would have passed by unnoticed just a couple of weeks ago. Now I am full of wonder…
In the middle of this personal renaissance (It’s Never Too Late to be a Better Human), I came across this talk on TED. It was all part of a conspiracy, a divine conspiracy, using Mary Doria Russell, a couple of neighbours, a husband who doesn’t mind me hogging his piano, and Benjamin Zander, with the sole purpose of getting me out of the habit of thinking that I’m in an inexorable drift into senile inertia. This afternoon I walked up to the Post Office and noticed a spring in my step that’s been absent now for too long. When I came back I got to the last bar of Jingle Bells before making a mistake (although, to use Zander’s analogy, I’m still a bird jumping fences instead of flying over them – definitely double-buttock playing).