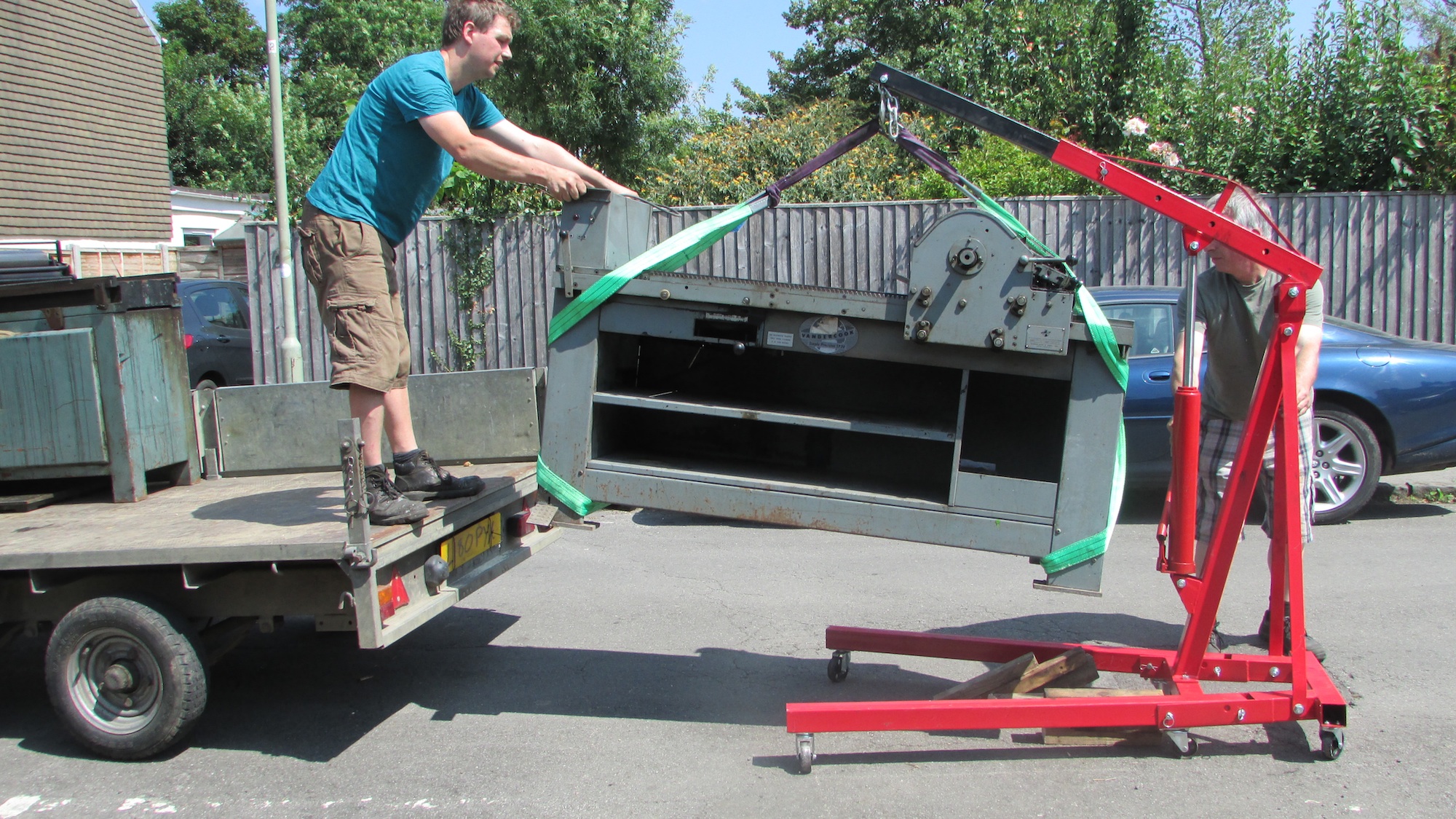 Ben and Rod finally get the Vandy on to the trailer after two hours of struggle.

It must have been about ten years ago when a Vandercook Cylinder Press moved in with us, a bit like an internal growth that put pressure on all the organs. David had found it online, being offered free to the first taker by a printer called Justin Howes. All we had to do was to collect it from Kettering.
At the time I was working on The Rebirth of Venus, in which Tommaso, the scribe who hates new technology, winds up employed by Aldus Manutius of Venice, one of the first printers and  finest of all times. I loved the idea of getting a press. It would give our company name – Godstow Press – some authenticity and I could play with compositing while dreaming my novel into existence. Humph. A Vandercook is not an Eagle, one of those great old printing machines based on the olive press. It’s an ugly grey thing that looks like it would be good for wheeling stuff to and from cold storage. Still, it came with a lot of kit, and Justin was a lovely man. Our reconnaissance trip to Kettering, in our neighbouring county of Northamptonshire, led to long chats with him in his print shop about Manutius. We gave him a copy of A Tabernacle for the Sun and he became something of a fan.

Justin was a very big noise in letterpress printing, although one of the quietest people it’s been my pleasure to meet. He was dissolving his printshop to start a new career as curator of a printing museum in Antwerp. He died very shortly afterwards, so very young and so very talented. There is a list of extant Vandercooks. Ours says, ‘Belonged to Justin Howes. Present whereabouts unknown.’ Well, try our garage.


It arrived on one of those pick-up trucks called a ‘grabber’. It seemed so extreme a purchase, except we hadn’t paid anything for it. It arrived and after some struggle and strain, it was installed. And that was the last we saw of it. A piece of kitchen worktop quickly turned it into a bench. It pressed nothing in all those years. It was just too intimidating. With my novel finished and done, and all juicy details about early printing garnered from a day’s letterpress workshop at Claire Bolton’s, I lost interest while David grew increasingly frustrated at the lack of space. The kit that came with the press included two great galley racks, guillotines, gauges, and stacks and stacks of A1 paper, but all we wanted in the end was the space to breathe. Enter Ebay.
Ebay recommends starting prices of 0.99p to ‘encourage bidding’ but that seemed plain silly. We opted for £300 thinking that if we didn’t make that, we’d keep relisting it until we did. In fact, we made it in the first minute. By the end of the following day, the rocketing price had settled at £1,200 and there it stayed all week. Towards the weekend a couple of other bids came in, but the highest bidder remained the highest, swatting the competition like flies. We had people contacting us, begging us to end the auction early, but why would we? One chap came to see it – stroke it – and was so nice (straight out of the Howes camp) that we longed for him to put in a winning bid, but he failed. Everyone failed, even our week-long highest bidder. With two minutes to go on Sunday night, it had doubled to £2,400. I couldn’t take the strain; besides our takeway had arrived. I went downstairs. Two minutes later, I went upstairs. Sale had ended. The bidding had gone mad in the last seconds. The winner had put in his bid with four seconds to go.
How much? Well, put it like this. David and I looked at each other like enamoured puffer fish until finally I muttered, ‘new armchairs’, to break the spell. He nodded, we ate. Thank you, Justin. The Vandy is going to a very good home at Nonpareil Press in Slad, Glos. She will get printing again, and perhaps the provenance list will be updated. So, sorry to all the failed bidders. Just wish we had 11 more of the presses. Honestly I do.

The Marriage of Heaven and Earth